NEET Biology MCQ on Biotechnology and Its Applications

1. Which of the following restriction enzymes produces blunt ends?

2. Which kind of therapy was given in 1990 to a four-year-old girl with adenosine deaminase (ADA) deficiency four-year-old?

3. Which of the following method is not used for gene transfer.

5. Which of the following is not a genetically modified plant?

6. The DNA fragments separated on an agarose gel can be visualized after staining with :

7. The process of separation and purification of expressed protein before marketing is called :

8. A gene whose expression helps to identify transformed cells is known as :

9. First plasmid of which bacterium is used as a vector in rDNA technique:-

10. Restriction endonuclease cut the DNA molecule at which site?

(2) Between two base pairs

(3) Between sugar and base

(4) Between phosphate and base

11. In r-DNA technology which part of Ti-plasmid of Agrobacterium is transferred to the host plant?

13. Which of the following is commonly used as a vector for introducing a DNA fragment in human lymphocytes?

14. In India, the organization responsible for assessing the safety of introducing genetically modified organisms for public use is

(2) Council for Scientific and Industrial Research(CSIR)

15. A 'new variety of rice was patented by a foreign company such varieties have been present through in organizations India for a long time. This is related to

16. Use of bioresources by multinational companies and organisations without authorization from the concerned country and its people is called 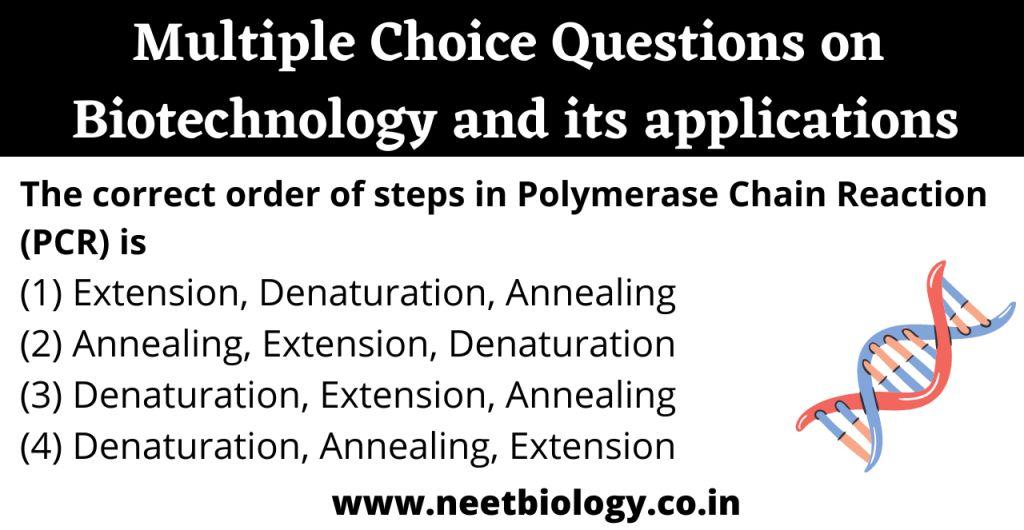 17. The correct order of steps in Polymerase Chain Reaction (PCR) is

19. A foreign DNA and plasmid cut by the same restriction endonuclease can be joined to form a

20. Which of the following is not a component of downstream processing ?